Our vestry members serve 3 year terms, and we elect a new class of vestrymen and women each year. Nominations are made by a committee and by the parish at large during our annual meeting.  We encourage anyone who wants to serve on the vestry to raise a hand and let us know.  This is not a closed group or a club of some kind.  We draw our leaders from across our parish spectrum, and we don’t want people to be shy about expressing an interest in this kind of service. The eligibility requirement for election to the Vestry is as follows:

Canon 11, Section 4.
Only lay persons, who are confirmed adult communicants in good standing of the church, as defined in General Convention Canon 1.17, shall be eligible for election as Vestry members of such church. However, regardless of eligibility of a person for election, no person shall be elected at duly convened congregational meetings to consecutive full terms on a congregation’s Vestry or Vestry Committee. 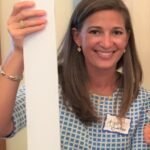 Ashley is a lifelong Episcopalian and grew up attending St. Mary’s. When she and her family moved back to Richmond in 2012, they tried out a variety of other Episcopal churches in the Richmond area, but that first Sunday back at St. Mary’s felt like coming home and they have attended St. Mary’s ever since. Ashley has been active in the St. Mary’s community by teaching Sunday School, helping to plan Vacation Bible School, and participating on the Children’s Ministry Committee. Ashley looks forward to growing in faith and God’s love by serving the St. Mary’s community in this new way.

Sam’s, along with his wife Debbie’s, search for a spiritual abode came to an end in November 1986 when Jimmy Burnham’s words filled them with joy and cemented their faith in St. Mary’s community. Jimmy said, “Welcome home.” The following October, Bishop Phillip Smith received Sam and Debbie into the arms of St. Mary’s and their new Episcopal faith. Bishop Smith wrote these words in Sam and Debbie’s Books of Common Prayer, “Welcome home!” Sam immediately began to work with our youth, serving as a Sunday school teacher, and eventually becoming Superintendent of our Sunday school. He also served on the Vestry during the construction of ‘Big’ St. Mary’s. Sam also served on the Organ Committee when St. Mary’s received the gift to install our glorious Schantz organ. Professionally, Sam is a Civil Engineer and worked for James River Corporation for most of his career. In 2007 he left the industrial world, joined the University of Richmond, and started a small consulting firm. He currently teaches career management, personality, leadership, and problem solving in the form of 6 Sigma and Lean. He is honored to serve his family’s spiritual home and looks forward to our continued journey together. 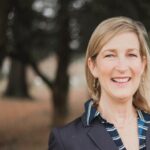 A lifelong Episcopalian, Owen became a member of St. Mary’s in 2000 when she moved to Richmond as an adult. St. Mary’s has always had a special place in Owen’s heart, as her grandparents were members, and her parents were married in Little St. Mary’s in 1963. Owen and her husband, Steve, have three children–Catherine (27), Sarah (24), and Webb (11). Their children have been baptized, confirmed, and/or married at beautiful St. Mary’s! Owen has volunteered in the nursery, taught Sunday school, and served on the Children’s Ministries Committee. She has also enjoyed participating as a greeter and a lay pastoral care team member. Owen is an attorney with Herndon Law P.C. specializing in criminal litigation and estate planning and administration.

Jesse was married to Anne at St. Mary’s and is father to Eleanor and Harry who were both baptized at St. Mary’s. Jesse’s St. Mary’s journey started with meeting with the Rev. Dr. John Miller (prior to marrying Anne) at the front of New St. Mary’s and most recently continued by serving as part of the team that transformed some t-posts, greenery, and a projection screen into a manger for the drive-through Christmas pageant. Through the years at St Mary’s, Jesse has been honored to help with Sunday School, CARITAS dinners, planning for guest speakers, Lay Eucharistic Ministry, fishing club, and helped with a handful of other “things that needed doing.” Jesse grew up on a farm in Timberville, outside Harrisonburg, but has called Richmond and St. Mary’s home for a decade and a half. Jesse is excited about being part of the Vestry based on a conversation he had with the Rev. Andrew Moore years ago that echoes anytime he thinks about volunteering at St Mary’s: “The more you give to St. Mary’s, the more it gives to you.”

St. Mary’s elected four new members of the Vestry at the Annual Congregational Meeting on Sunday, February 2, 2020. The four new Vestry members are: 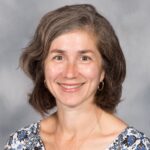 Jill Aveson is a lifelong Episcopalian who spent her early years in Connecticut, but most of her life in the Richmond area. She joined St. Mary’s church in the late 80’s and she and her husband, Bobby, were married in New St. Mary’s the first year it was opened. Jill and Bobby have three adult children, Bobby (24), John Ryan (22) and Lydia (21), who were all baptized and confirmed at St. Mary’s. She spent many years teaching Sunday School and has served on the Children’s Ministry committee. In addition, she currently serves on the Welcoming Committee. Jill received both her BS degree in Psychology/Business and her MBA from the University of Richmond. She has been at Collegiate School for over 20 years and serves as their Director of Human Resources. Prior to joining Collegiate, she held leadership positions in Human Resources in both the insurance and manufacturing sectors. 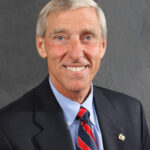 Wayne Dementi is president of Dementi Milestone Publishing, and has been in the book publishing world for 15 years, having released over 250 books, most of which celebrate Richmond and Virginia storylines. He is a University of Richmond graduate, with an MBA from Old Dominion University. In addition, Wayne is active in the Goochland community having served as president of Goochland Fellowship and Family Services (now Goochland Cares), the Goochland Chamber of
Commerce, the Goochland Historical Society, the Goochland Rotary Club and Goochland Pet Lovers. Wayne and his wife, Dianne live in Goochland, and have been members of St. Mary’s Episcopal Church since 2016. They regularly attend the 9:00 a.m. service. 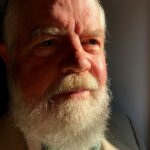 On his very first Sunday at St. Mary’s, Robin witnessed Holt Souder hand over the reins to John Miller with the reminder to the congregation that the initials “IHS” carved on the Holy Table did not refer to Isobel & Holt Souder. Robin has ever since been an enthusiastic supporter who has tried to show up, pay attention, lean in, and stay strong, sometimes achieving two or three out of the four at one time. He has been a Sunday School Teacher, member of the Fellowship and Breakfast Committees, newsletter managing editor, Region XII Representative, Delegate/Alternate, 1984-2005 Diocesan Councils; Lay Eucharistic Minister and, with his wife, Kitty Williams, was a graduate in 2000 of the first EFM Class, taught by Christopher Brookfield. Since 2001 he has been a member of the Goochland County Electoral Board, supervising elections in the county. He is a former newspaper journalist, editor and publisher. He is the author of several books, including “Stewards of the Mysteries of God, The Story of the Bishops of the Diocese of Virginia,” published in 1996. He and Kitty, a former member of the vestry, live in Manakin-Sabot. Their children, Frankie and Maria, were raised in St. Mary’s; Maria was married here in 2003 and her twins, Lochlan and Thatcher, were baptized here in 2008. 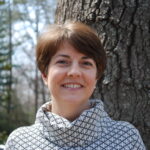 Missy and her family have been members of St. Mary’s since moving to Richmond in 1997. In the ensuing years she taught Sunday school, Vacation Bible School, chaired the Children’s Ministries committee, served on the Youth Ministries committee, and currently helps out with church dinners and receptions. She previously served on the vestry and chaired the St. Mary’s Preschool board. Missy is currently a member of the Alumnae Board of Hollins University and works in Human Resources at Collegiate School. She is married to Matson Roberts and has two adult children. 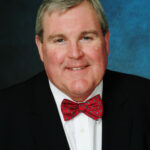 Harry and his wife, Jeannie, returned to Richmond after 12 years in Alexandria, VA. While members of St. Paul’s in Alexandria, Harry served on the Vestry and as Senior Warden for two years. Prior to moving to Alexandria, they lived in Richmond where he served on committees at St. Stephen’s Richmond while a member there and was on the vestry at St. Andrew’s in Oregon Hill. At St. Mary’s, both he and Jeannie serve on the Fellowship Committee – Harry cleans up rather than cooks — and he gets great benefit from being a participant in the Men’s Spiritual Practice on Tuesday mornings. Of importance to Harry about St. Mary’s is the strong spiritual home of the parish family supported by clergy and lay persons, the significant growth potential for all age groups in the church, and the active presence of the Holy Spirit in this parish. 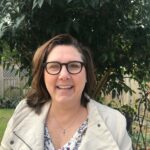 Christy and her family re-joined St. Mary’s in the winter of 2016. She is married to Gray with two children, Ellieblue and Zane. Since joining, Christy has been very active as a volunteer for the youth ministry. She has chaperoned and planned many youth functions. All that led to being on the Youth Ministries Committee, where she serves on the Acolyte sub-committee and as the Youth Ministry Committee Chair. 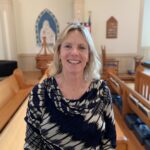 Ann started coming to St. Mary’s 38 years ago with her husband Rick when they had their first son. Although Ann grew up in the Presbyterian Church, she immediately felt a part of the church community and welcomed the inclusive doctrine of the little church. When her three children were young, she taught Sunday School and learned more than they did! Education is the part of church participation that she appreciates the most. Through various study groups and two years of EFM, Ann has broadened her base, but knows there is so much more to be understood. In addition, over the years, Ann has had the pleasure to serve on the Altar Guild and enjoys the comradery of the ministry. The last time Ann served on the Vestry, St. Mary’s didn’t even have a choir. Much has changed, yet the spirit of the country church seems alive and well. Ann is hopeful and excited about the future under David’s fresh leadership. 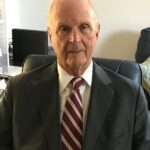 Danny and his wife Georga transferred to St. Mary’s from All Saints Episcopal in late 2014 because of the strong attraction of family (his sister Peggy Talman was Senior Warden at the time) and history (they were married by Stanley Ashton in 1961 as St. Mary’s was Georga’s family church). He has been an active communicant since 2014, and has strong church leadership experience, having served three terms on All Saints’ Vestry including one as Senior Warden. He has been retired for fifteen years and is 81 years old.