No organization can run, much less flourish, without staff: the people who keep the place going.  We are truly blessed with a wonderful support team.  Most of these folks are exciting recent additions to the team and few others have been here for years.  They all have stories about the road that led them to us.

Elizabeth, as of August 2021, became the new Executive Director for Church Operations. In this new position, Elizabeth will have oversight of the physical facilities of the parish, coordinate the work of St. Mary’s Sextons, and work with the Parish Treasurer and Finance Committee to oversee the finances of the parish. Elizabeth has been serving at St. Mary’s since March 2017, first as the Administrative Assistant and then as the Church Office Administrator. Elizabeth is a graduate of Sweet Briar College and received her Masters in History and Museum Studies from University of North Carolina at Greensboro. She has most recently been the Collections Manager at the Longwood Center for the Visual Arts, an art museum in Farmville, Virginia. Elizabeth is excited to be here at “such a welcoming, fun, collaborative work environment and to be part of an awesome community that shares a strong commitment to making a difference locally, nationally, and internationally.”

Director of Communications and Parish Life

Ashley is a graduate of University of Mary Washington and a lifelong Episcopalian. She has most recently been the Communications Associate at the Diocese of Virginia, where she previously worked in the Mission and Outreach Department. She also served for a year in the Philippines in the Episcopal Church’s Young Adult Service Corps. Her role includes overseeing and expanding our communications efforts, working with the Outreach Committee and our outreach partners to grow and improve our outreach relationships and opportunities, and facilitating involvement of St. Mary’s parishioners in other ministries and aspects of our common life.

Amelia McDaniel has served as a Christian Education Director and teacher to several congregations and an Episcopal Day School over the past 20 years.  She began her career in Richmond at St. James’s.  Her travels have taken her to Raleigh, Alexandria, Nashville and Baton Rouge.  She is thrilled to be back in Richmond.  Amelia is excited to be working with the children and families of St. Mary’s to continue to build upon its nurturing and family friendly programs.  Amelia grew up in Middle Tennessee and graduated from Sweet Briar College.  She has two children, Wyly and Jed, and one badly behaved Labrador named Ruth. 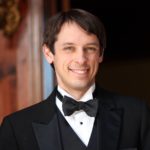 Ryan joined the St. Mary’s staff in September 2017. He did his graduate work in choral conducting at the Indiana University Jacobs School of Music and the University of Delaware, and his undergraduate study at Princeton University. Ryan has been involved in church music since high school, and over the past two decades has sung, played organ and piano, and conducted choirs in a variety of churches.

Before moving to Richmond from Philadelphia in 2015, Ryan served as Organist and Choir Director at Summit Presbyterian Church, Assistant Conductor of Mendelssohn Club of Philadelphia, an adjunct faculty member at The College of New Jersey, Music Director of the Newark Symphony Chorus, and maintained an active schedule as a professional singer. Since moving to Richmond, he has been the Artistic Director of both the Central Virginia Masterworks Chorale and the Richmond Concert Chorale and served for a year as Interim Organist and Choirmaster at St. Thomas Episcopal Church. A native of Wilmington, Delaware, Ryan lives in Richmond with his wife Kate, a chemistry professor at VCU, and their cat, Rocky. 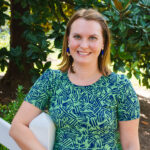 Lauren joined St. Mary’s staff on September 20, 2021 as the welcoming face when you stop by the office and the friendly voice who answers the phone. Lauren is excited to be a part of the St. Mary’s community. She has worked for various churches and denominations for more than 13 years as a cantor, soprano section leader, formation assistant, and in communications, most recently at the Cathedral of the Sacred Heart. Her role as the Office Administrator at St. Mary’s includes answering phones, preparing the worship bulletins, and assisting parishioners, staff, and clergy in their various needs. A native of Richmond and graduate of Virginia Commonwealth University, Lauren has three children, two kittens, and a senior Siamese cat. When she is not working or on mom duty, you can find her performing in various professional choral ensembles in the region.

Paul will have been our Sexton for 20 years this June.  He was born in Goochland County in Hadensville, the 11th of 12 children.  After three years in the army, he returned to his birthplace.  He found us in 1992 and has been an important part of our parish family ever since.  When we asked Paul if we could take his picture for this site, he said, “Do I have to stand or can I keep working?”  The man is unstoppable.  When asked what he likes about St. Mary’s, he doesn’t miss a beat.  “Everything.  These are some of the best people I’ve met in my whole life.”  He and his wife Polly are members of Divine Baptist Church in Louisa, Virginia, where Paul served as pastor for many years. 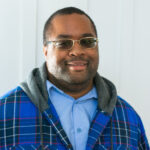