By: David May, Rector

Alleluia! Christ is risen! The Lord is risen indeed. Alleluia!

Last night, the liturgy for the Great Vigil of Easter began in the parking lot. The service began by lighting the Christmas tree that had stood here in the church at Christmas time. At Christmas, that tree had been adorned with ornaments the children of the parish had made representing God’s Story: creation, the fall, Noah and the Flood, Abraham and Sarah hoping against hope for a baby, and Moses leading the children of Israel out of bondage in Egypt. We burned that tree last night that exploded into a roaring pillar of fire to kindle the first light of the Resurrection of Jesus of Nazareth and to light the new Paschal Candle burning right there.

It used to be odd, a novel thing to have church in the parking lot. But after the two plus years we’ve been through, it felt pretty normal. Remember, we celebrated Easter morning last year in that same parking lot with pods of people in lawn chairs inside squares we’d painted on the gravel so we could be spaced out safely.

At the Vigil service last we night, we were back in the parking lot again. But then we travelled behind the light of the new Paschal candle like the children of Israel wandering in the wilderness, like our own wanderings in the wilderness these past two plus years, along the sidewalk and beneath the bell tower and up the stairs into the dark narthex and travelling on into the dim nave and came together in this church in our pews, gathered around this Holy Table beneath that mighty Cross for Easter; like we are now.

Maybe we haven’t arrived at the actual Promised Land, but it’s pretty close – we’re finally home together on this Easter morning!

So before anything else – to be together like this for the first Easter morning in this church in three years, having travelled so far together to be here now, I want to say, ‘Thank You, God!’ You can say it too or you could just give this preacher and Amen!

END_OF_DOCUMENT_TOKEN_TO_BE_REPLACED 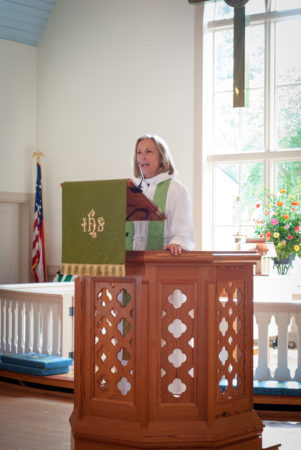 It’s not like we don’t have plenty of reasons to be. So did Mary Magdalene and the other Mary. They had been with Jesus since his first days of ministry in Galilee – Mary Magdalene was one of the many people that he healed there. The two Marys were among the community of followers who traveled with Jesus throughout the towns and villages to Jerusalem. They ministered to him and supported him financially along the way. They were with him at his triumphant arrival in Jerusalem on Palm Sunday and as the tide turned swiftly against him. They watched as he died an agonizingly slow death on the cross…as Joseph of Arimathea laid his dead body in the tomb and rolled the great stone to the door. Because of their close association with the crucified Jesus, the ruthlessness of those who killed him, and their own excruciating grief, they had plenty of reasons to be afraid.

We might wonder why they even risked going back to the tomb. Yet many of us do something similar when we are grief stricken. We simply cannot believe someone or something we love is gone. Even if what happened awakens fears in us that we never knew we had, we return to a place or a memory because what happened just doesn’t seem real, or even possible. Maybe the two Marys needed to go back just one more time to prove to themselves that the unthinkable had indeed happened.

Well, it had. But the two Mary could not have expected what came next. With the force of an earthquake, an angel rolls back the stone from the tomb. He frightens the soldiers who are guarding the tomb so much that they tremble and freeze. But to the two Marys he says, “Do not be afraid.” Once he has shown them that Jesus is no longer in the tomb, he urges them to go quickly and tell the disciples to gather in Galilee, where they will see Jesus. And then, in an instant, Jesus himself stands before them and tells them the same thing: gather in Galilee, and do not be afraid.

“Do not be afraid.” Our observance of Holy Week has just led us through a period of increasing sorrow. A joyful Palm Sunday procession shifted quickly to the Passion. We commemorated the Last Supper that Jesus shared with the disciples before they abandoned and betrayed him. We heard the unrelenting story of the torture that Jesus endured on the way to his crucifixion and the unimaginable horror of his death on the cross. When the world can so quickly turn upside down, why would we not be afraid?

Meanwhile, the world around us seems at least as unsettled as it was in Jesus’ day. Events in Afghanistan, Egypt, Syria, North Korea, and elsewhere make us aware of how high the stakes can be in this interconnected world. Closer to home, so many people we know and love are in the hospital, receiving difficult diagnoses, or otherwise enduring broken hearts. How can we not be afraid?

Because. Because the resurrection of Jesus proclaims that nothing is beyond the hope of God’s redemption, even in the face of what seems improbable, overwhelming, and impossible. “Do not be afraid.” Yes, we’ve heard it a thousand times. It sounds really good…until we’re called upon to do it. Until we have to face illness or heartache or fear itself, and we realize how hard it is to not be afraid. If you’re anything like me, it’s overwhelming how alone it can make us feel.

But it’s not something that we’re meant to do alone, any more than we’re meant to follow Jesus alone. We need each other. The second part of “do not be afraid” from both the angel and Jesus is to share the good news: to tell the disciples and to have them gather with Jesus in Galilee. Would the disciples even have believed either Mary if only one of them had told what she had seen and heard? But together, both Marys spread the good news. Together, the disciples will gather in Galilee, where they will see Jesus. Together, they will continue the feeding, healing, and teaching that first bound them together as a community of followers. And from there, Jesus will send them to make disciples of all nations. Do not be afraid.

As heirs of that original community of faith, we gather to share communion together; both words – community and communion – are rooted in the fellowship that we share as the Body of Christ. It reminds us that, whatever is happening in our world and the wider world, God steps in in the most amazing and unexpected ways, and we conquer our fears by living into the promises of Jesus’ life, death, and resurrection together.

So let’s live into the St. Mary’s community of faith together. That doesn’t mean that we do everything together, but it does mean that we support one another in strengthening our community – that we love one another as Jesus loves us. That we recognize that the stronger our community, the deeper our connections to God and each other. And the less we have to fear.

The possibilities are endless, and our job is to say yes.

We’re stronger together. Do not be afraid.