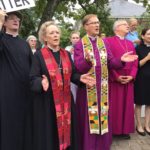 On Saturday our hearts were broken.  An angry group of neo-Nazi and fascist protesters came into Charlottesville, Virginia, armed and armored, looking for trouble.  The violence and loss of life suffered in their wake signaled yet another escalation of the hate-filled divisions of our time.  The peace of a beautiful university town was shattered.  The images that some had of America were broken.

The echoes of the heartbreaking tragedy that was Charlottesville will remain with us for a long time to come.  We have every indication that we will be seeing more of this.  Angry white supremacists seem already to be organizing to bring their ugly and racist rhetoric to other towns and cities across our Commonwealth and across the United States.  Angry resisters are more than ready to meet their violence with violence.

As followers of Jesus Christ, we are admonished to heed God’s call to love our neighbors through prayer, through speaking out and through other concrete action for the sake of all, particularly the poor, the oppressed, the judged, the demonized.  That witness was on display Saturday in Charlottesville in the peaceful march by hundreds of clergy leaders from Charlottesville, from our Diocese, and from other religious traditions in Virginia and beyond.  Such witness must continue.

There will be more rallies and more divisions. We must be prepared to meet those challenges, not with violent confrontation, but by exemplifying the power of love made known in concrete action.

As your bishops, we commit ourselves to action of the kinds we list below.  We invite you to join us and to share your actions with us so that we can grow together in wisdom, faithfulness and love.

Whatever we do we may not, we must not, be quiet in the face of evil during this violent era of our lives together.

Concrete actions in the face of white supremacists and others whose message is counter to Christ’s embracing love.