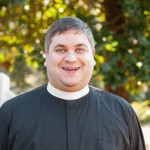 When I was growing up, I spent a week each summer at summer camp for the Diocese of Northern Indiana. It was held at Howe Military School’s campground. Looking back, I think that the facilities might have been held together by duct tape, bubble gum, and prayers. But to me, it was a magical place. We sang and played games and swam and sweated and praised God.

As soon as I was old enough I started working at camp. I fell in love with it in entirely new ways. Being able to provide others with the magical experience of camp and help them discover God’s love undoubtedly set me squarely on the path to becoming a priest. I’ve had the privilege of working at camps in Indiana, Chicago, Tennessee, and now Virginia.

I spent last week as the chaplain for a camp at Shrine Mont. It was the first time I’d been at camp in several years and the first time I worked at a camp since I became a priest. We sang songs that I learned as an 8-year-old camper. We prayed and played and swam and hiked. We told the stories of how we knew God at camp and in our lives. We talked about how we create sacred space at Shrine Mont and in the “real world.”

Being back in that environment, one that was both new to me and so very familiar, stirred something in my soul. I felt a very strong connection to the 8-year-old Andrew who was just beginning to understand the powerful presence of God in his life and in his heart. And it felt as though something was being fulfilled within me, something that God had begun all those years ago.

Camp is truly one of my sacred spaces, a place where I feel God’s presence so closely. Camp shaped my soul in ways that I continue to discover. It was a blessing to be back at camp and share with a new group of young people that there is plenty of space in God’s kingdom for playfulness, for wonder and awe, for searching questions, and for priests who are silly.